After seeing my favorite knit wear designer STEPHEN WEST last weekend in New York I decided to go to his next tour stop in Baltimore yesterday, at Woolstock yarn shop. He and knit designer StevenB will be touring the East Coast for 4-5 weeks, and I am trying to hit as many venues as possible, wearing a sweater he designed at each. Going to these "fashion shows" is great fun, and one of the best parts is meeting other Knitters who like his unusual designs! 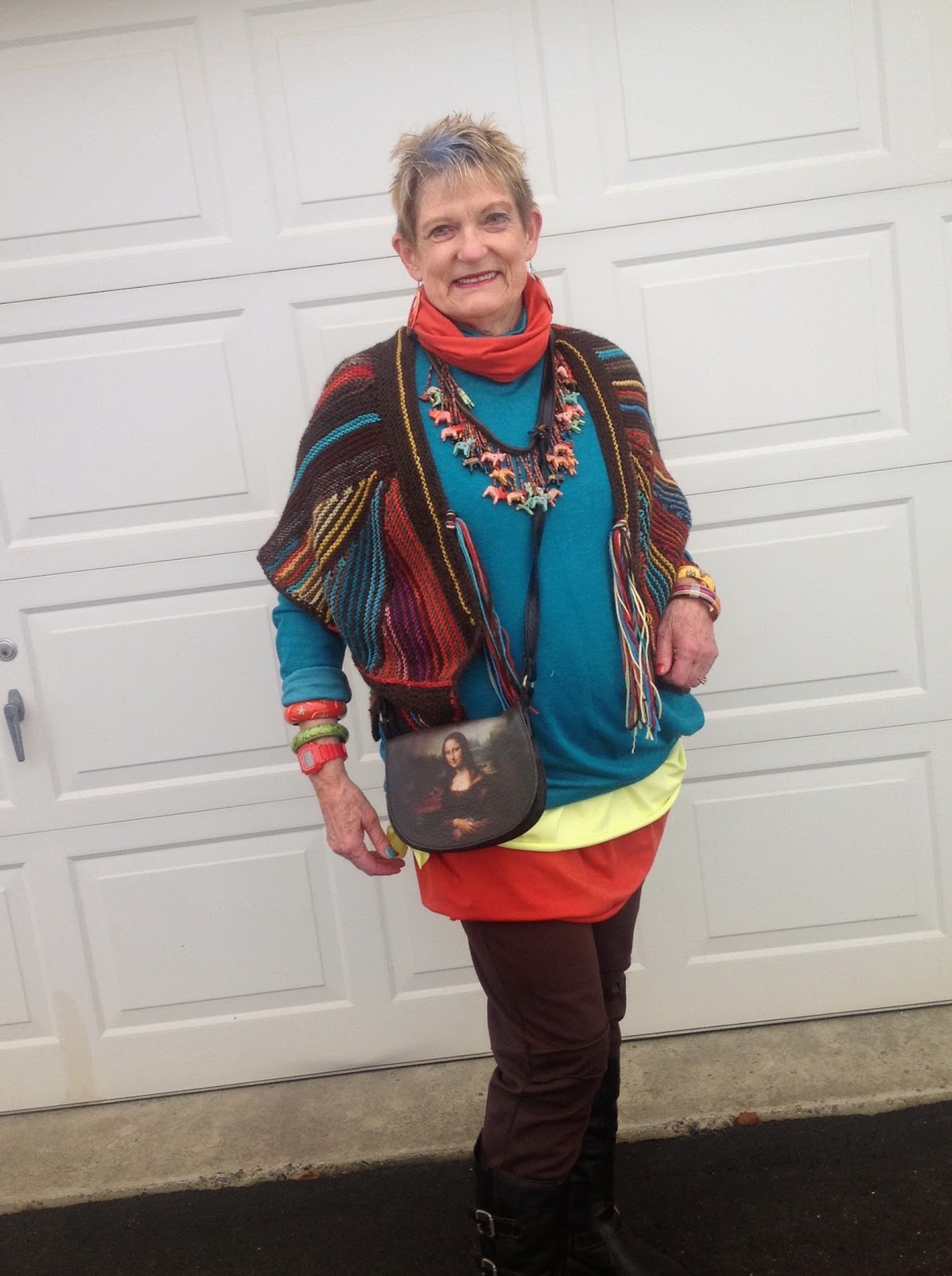 Here I am in his newly knitted "Royally Striped" vest. It was so challenging and fun to knit, with stripes going all which ways, like a puzzle! 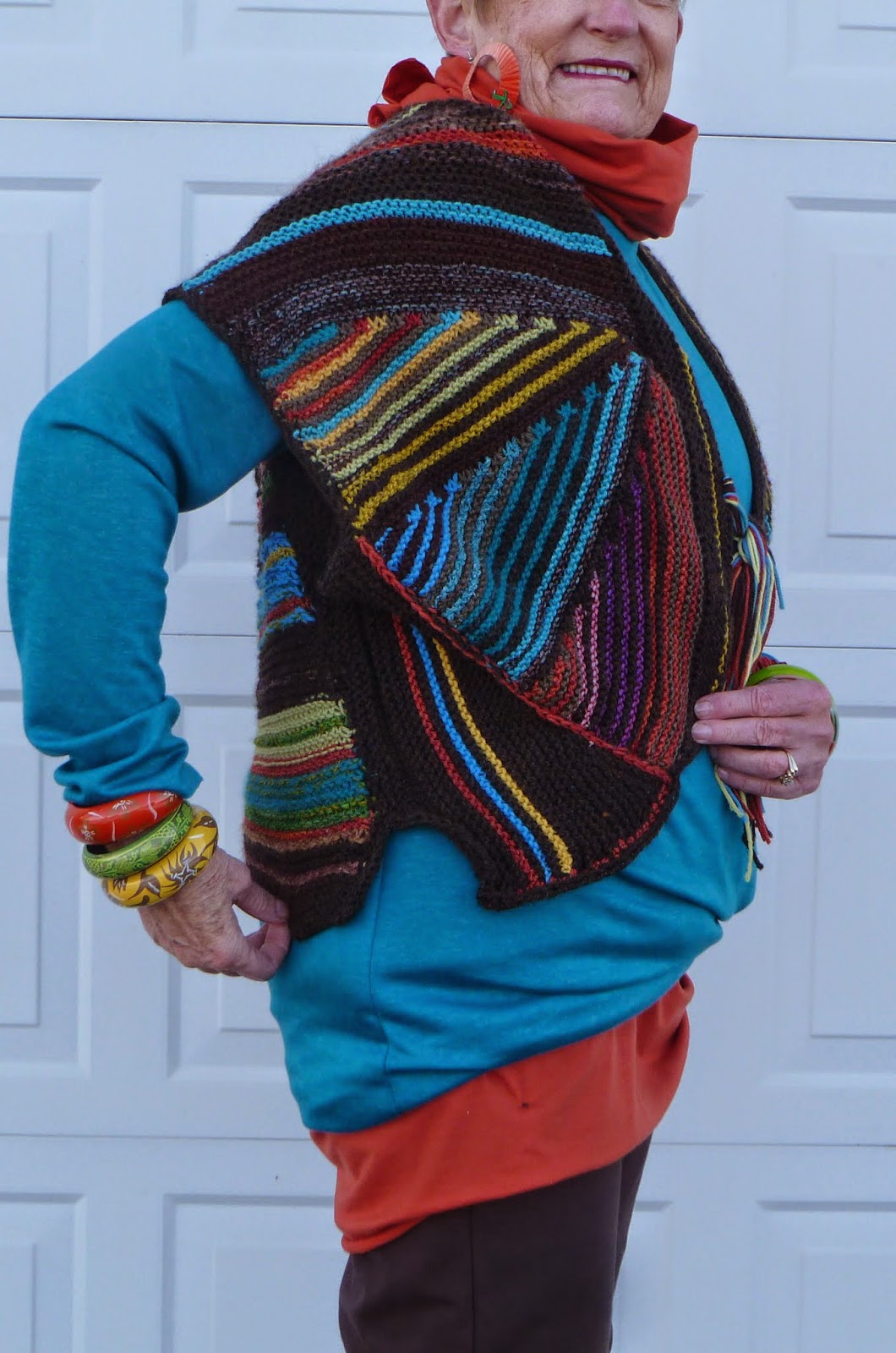 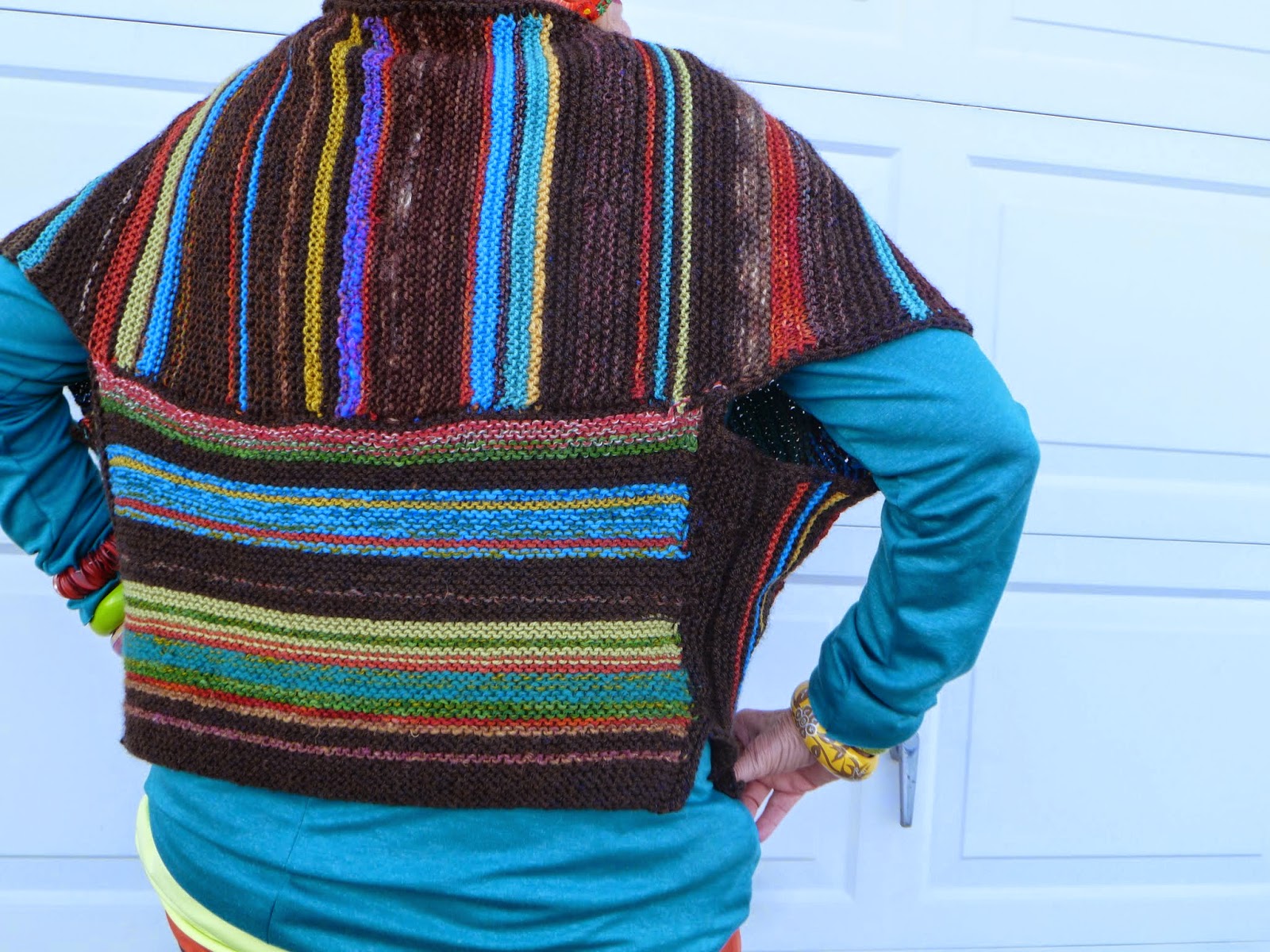 Here  I am with Stephen himself! 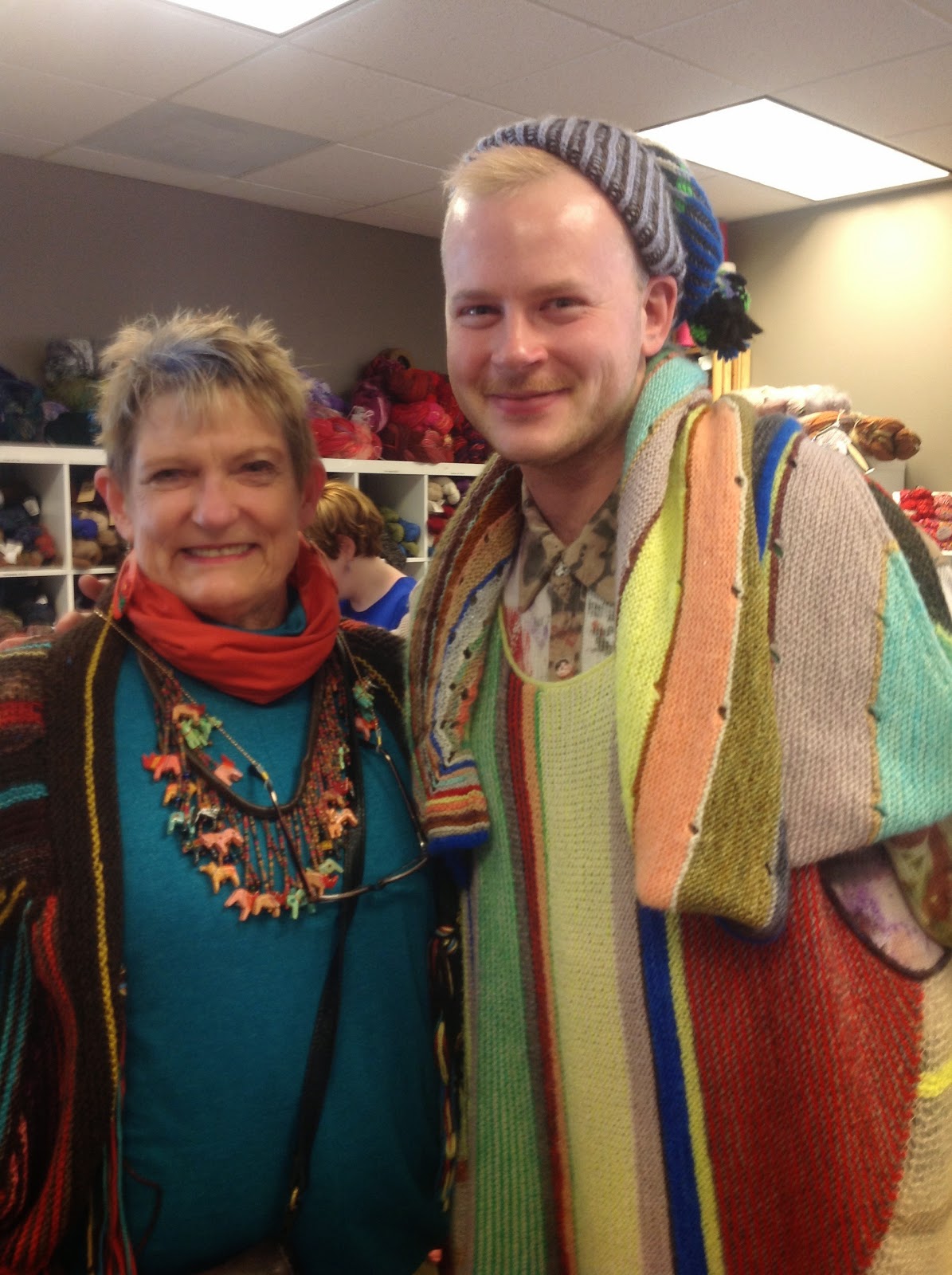 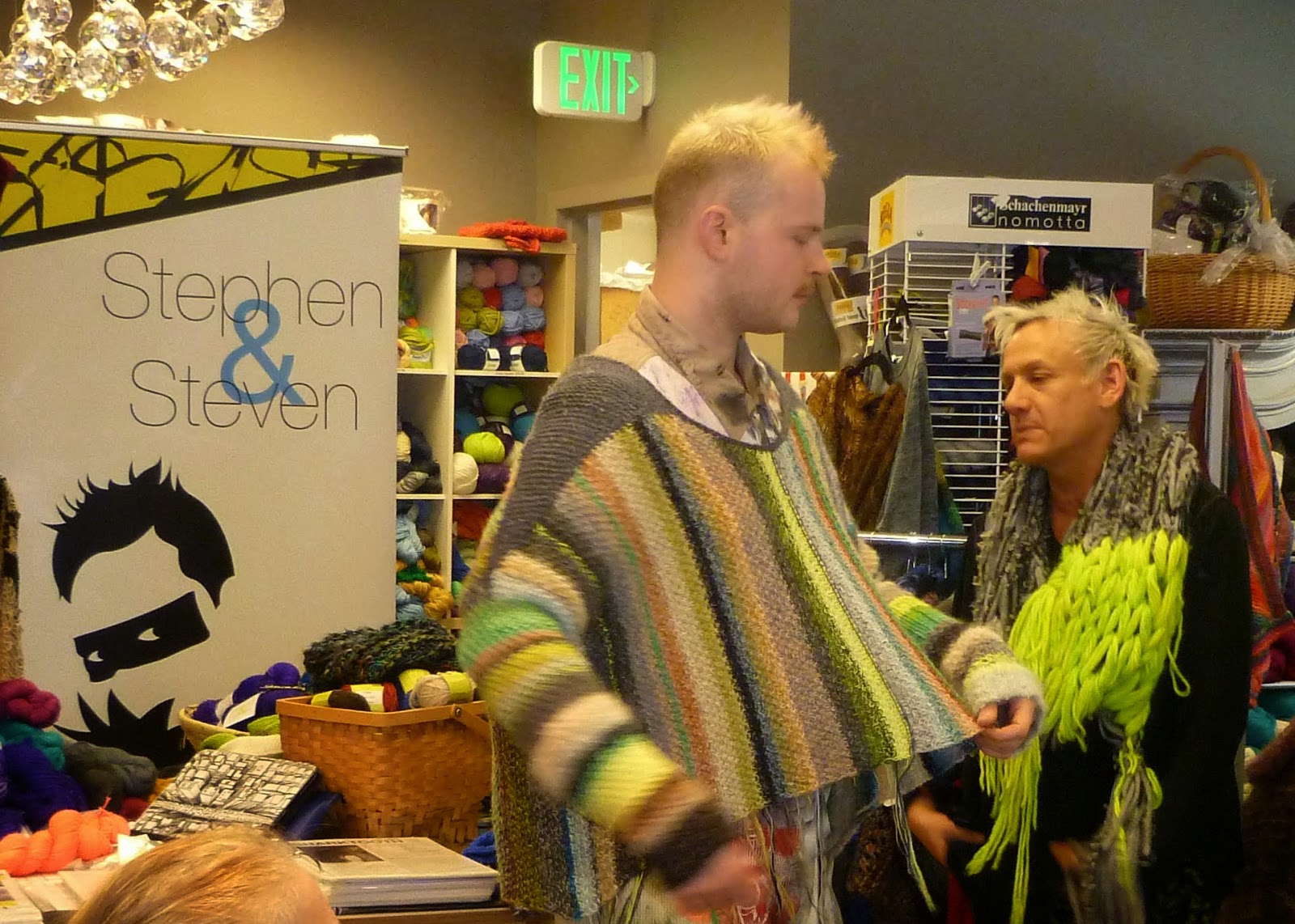 He is wearing the sweater design in this one that I am working on for his next tour stop!

Strangely, I had more comments from other knitters there on the rest of my outfit and questions as to how I found things to coordinate.  Of course you readers that are sewers will realize that I sewed all the other items I am wearing.  I took my yarns to FABRIC MART (the actual store, not the website) and was able to find all these great knits.....the 3 tops are just basic tee shirts, each cut a little longer than the next (an idea from a Marcy Tilton pattern) and the pants are Vogue 8859, a Marcy design. Purse is from Icon and the blue streak in my hair is temporary!

Back to my knitting so I can turn up at their next stop in Alexandria, VA  at Fiber Space Yarn shop for their Saturday trunk "Show and Tell" and meet more knitters who love challenging and wild designs.....hope to see some of you there!
Posted by pegsewer at 2:08 PM 5 comments:

I was fortunate enough to attend the knitting convention put on by Vogue Knitting Magazine in Manhattan this past weekend and had a wonderful time. In addition to the classes, lectures, fashion shows and vendors, they added a new activity this year.....the Readers' Runway Show.

They asked for applications from knitters showing an article they had knitted from the magazine and chose 30 items to be modeled on the fashion runway. This is the item I applied with and was overjoyed to be accepted!

This pattern actually hadn't been in their magazine but was the signature sweater of the VKL advertisements and was free on their website. Here is a pic of the original. As you can see I added more colors! 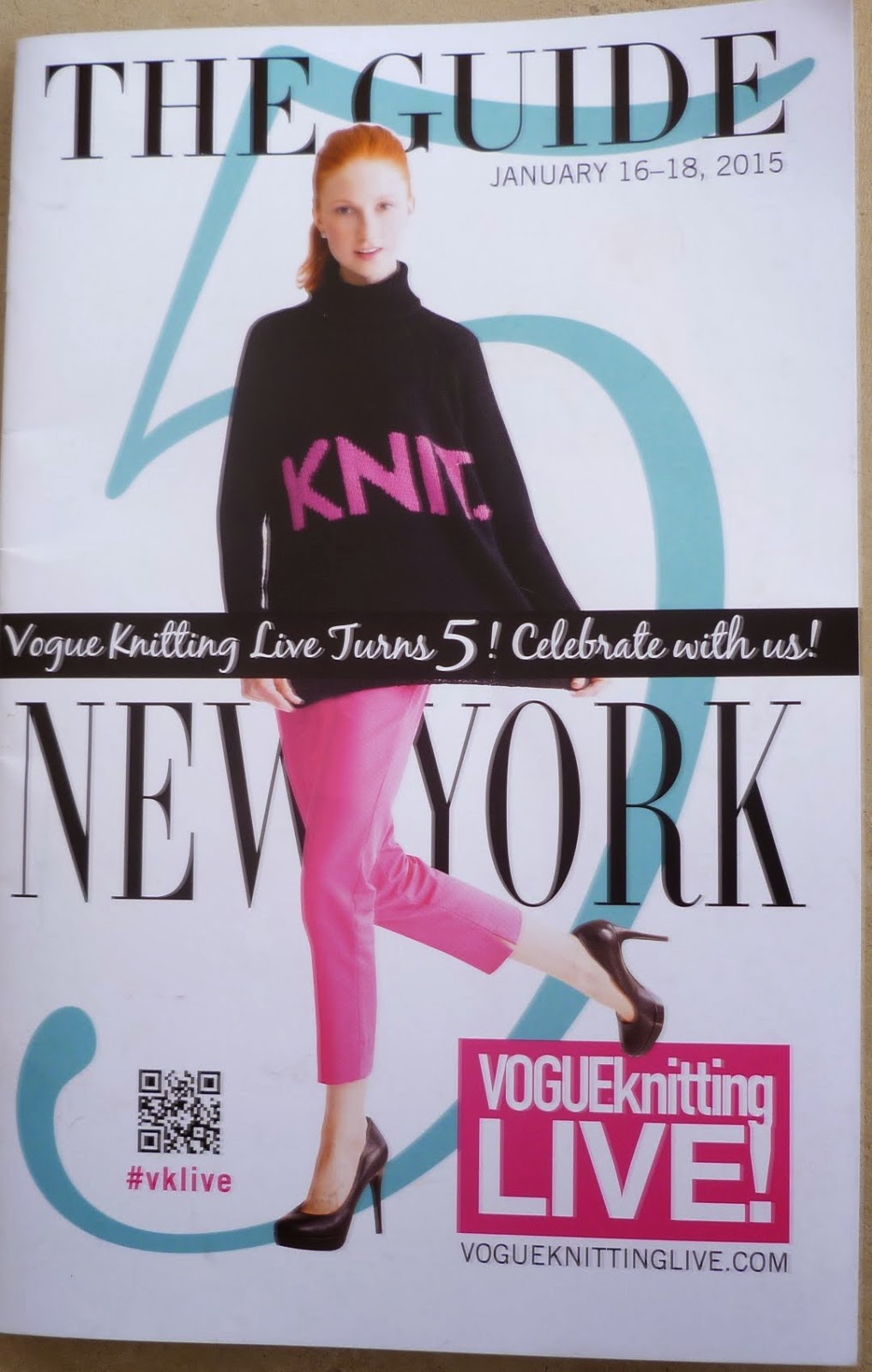 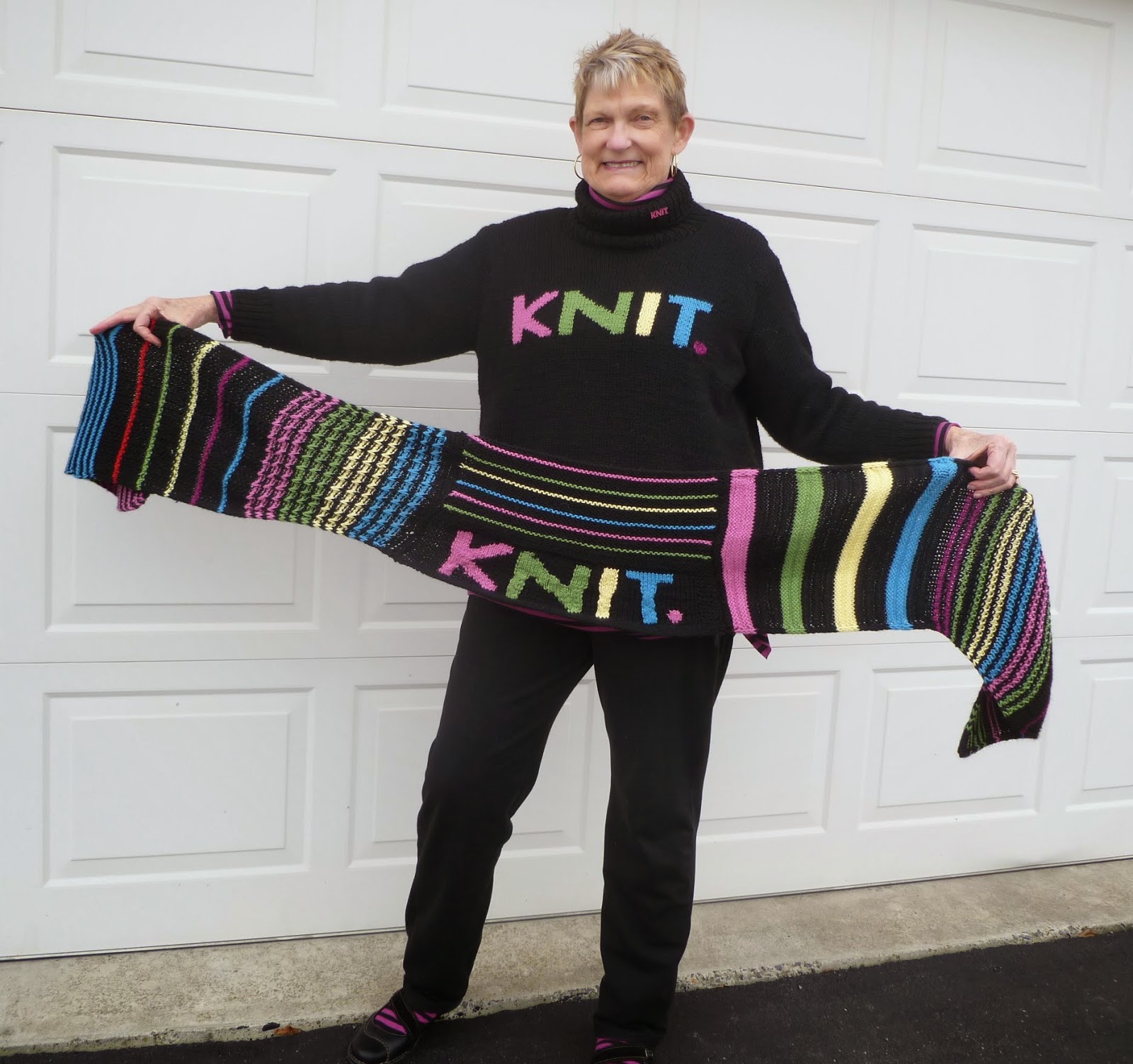 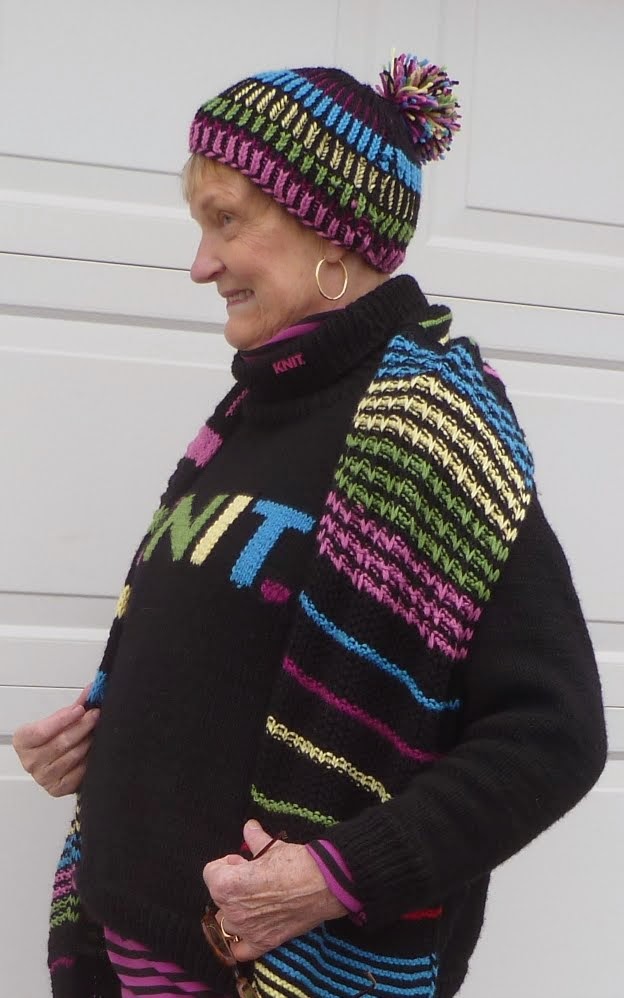 It was so much fun to walk the runway in my creations, and especially to visit backstage with the other 29 participants who came from all over, even some from Europe!  We are hoping they will keep this event next year and I am already considering something from Vogue Knitting Magazine to knit for it.

The other fun thing was that I was able to take 3 classes with my newly favorite knitware designer, Stephen West. As I said in my last blog, he really has a talent for designing VERY DIFFERENT items than your average sweater.   Here I am with him in his "YES" themed outfit, which he used as the central idea for the class to convince us to try new ways of knitting. 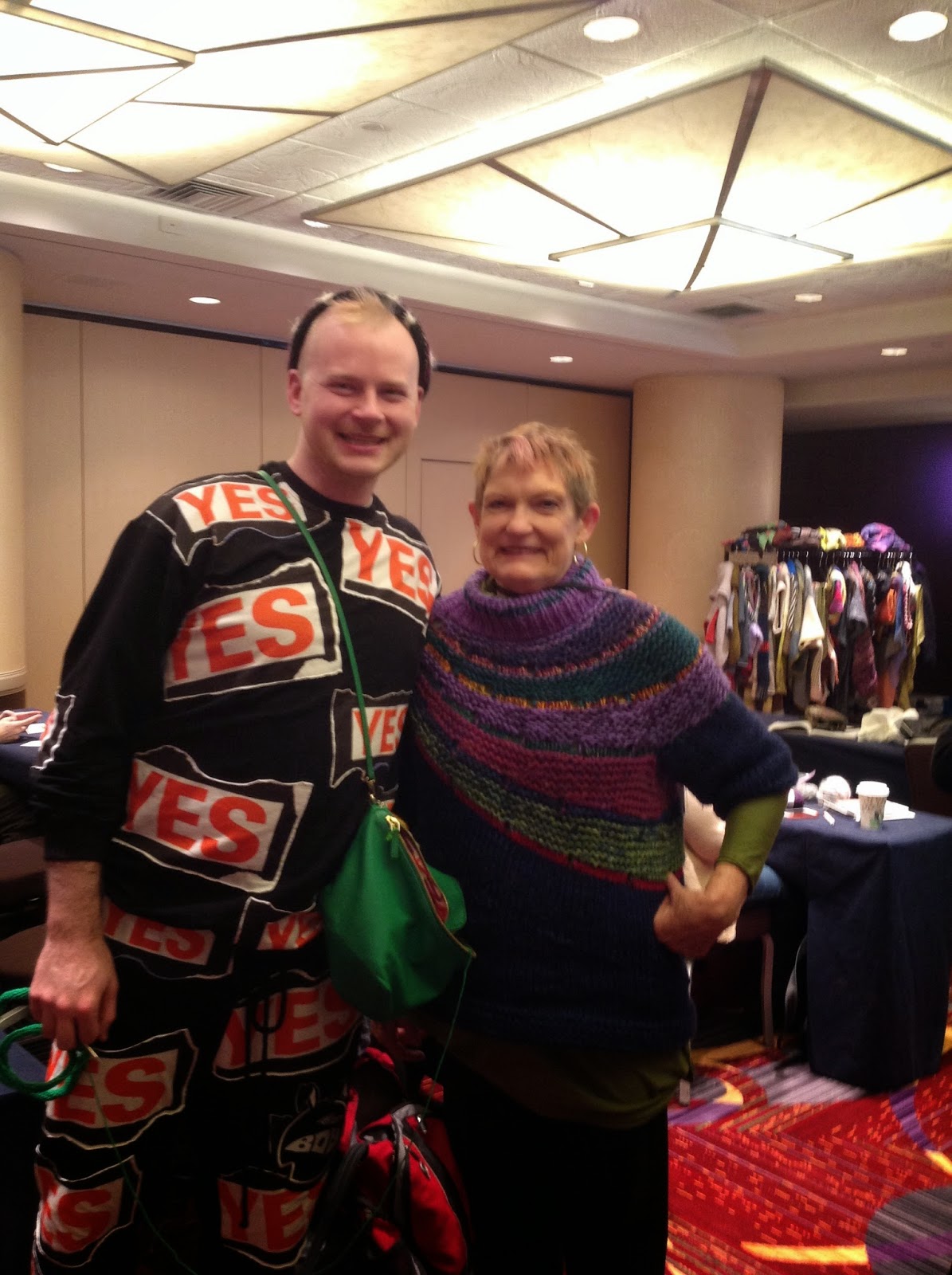 But there is more fun to come! Stephen, along with his teaching partner StevenB, are now going to be touring the East Coast for the next 4 weeks, giving classes and putting on their fabulous fashion shows showing their originals.       I have become a total GROUP-ie   and plan to follow him around to several different events in the next weeks. I am trying to have a different creation knitted up for each of his locations and get my picture taken with him so STAY TUNED!     Knitting away madly here.....
Posted by pegsewer at 11:19 AM 3 comments: